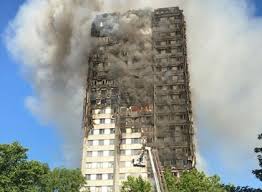 Image from ‘The Grocer’

The disastrous, multi-fatality, fire in a London residential tower block exposes more than questionable building practice.  With any luck it may, just may, also finally drive a stake through the still twitching heart of Austerity.

On the night of 13/14 June Grenfell Tower, 24 storeys of flats in the London Borough of Kensington and Chelsea, caught fire.  At the time of writing it appears the fire started accidentally in one flat on the 4th floor.  There are unsubstantiated suspicions of arson, perhaps because the block seemed almost to be home to many ethnic minority families, some of them refugees.  It is critically important that the Fire and Police authorities establish (and hopefully rule out) whether the cause was deliberate but the painstaking forensic work to prove, or disprove, arson has added to the slowness of the recovery operation.  This slowness added to frustrations which boiled over into direct action and the storming of the Town Hall.

Whatever the cause, the fire took hold and spread with astonishing speed and, despite heroic efforts of firefighters, the result has been scores of deaths and injuries and hundreds more made homeless.  The shell of the building will probably be demolished but perhaps part of it should remain, Reichstag-like, as a permanent reminder of the obscenity of Austerity: a symbolic headstone for one of the most unfair and divisive policies of our times.

Questions are being raised about the safety of similar high-rise residences, and especially local authority social high-rise residences, all across the UK.  As the initial shock subsided, anger appeared.  Anger directed at government (local and national), at architects, building contractors, indeed at anyone who represented authority who, however well intentioned, appeared at the scene to offer ineffectual sympathy and support.  This anger has already been seized on by groups who have taken advantage to promote a political agenda.

What we have seen, though, is the paralysis of parts of the local and national government system.  It seems unable to act in a coherent and effective way, and yet there are co-ordinated and rehearsed response plans for tragic events which result in mass casualties, like terrorism, a train or plane crash, or a sports stadium fire.  These plans derive from, or are refined because of, previous events where procedures were found wanting.  In this case, however, the authorities seem to have been totally unprepared and, worse, made incapable of responding by not having resources (physical, financial and especially human).  Faced with hundreds of people evacuated from the fire in their nightclothes, who had lost everything including the lives of family members, they appeared to not know what to do.  It was left to the community itself to respond with water, food, clothes and even shelter.  The immediate, and urgent, need to distribute casualties to hospitals across London, many of them unidentifiable or incapable of identifying themselves, led to mass uncertainty about the numbers, identity, and whereabouts of survivors.  The apparent systemic failure to track, and keep track of, people has added to the anger.  Furthermore, the event has exposed an uncertainty about who was in the building in the first place.  Some flats were owner-occupied, presumably sold off under Thatcher’s “Right to Buy” legislation.  Questions about who was entitled to be there, who may have been visiting legitimately, who was absent for any reason, who might have been ‘camping’ unofficially with friends or relatives, who may have been illegally sub-letting from the rightful tenant appear, so far, to be unanswered and perhaps unanswerable.  We may never know, and we may never even know the identities of those persons whose bodies are recovered.  If the building collapses spontaneously before all the victims are recovered, we may even not have a total number of bodies, never mind all the identities of victims.

At the heart of this is the housing crisis:  in a major city, with high numbers of transient people, there will always be some who ‘bend’ the rules.  It is inevitable.  However when housing provision is inadequate (in quality, quantity and affordability), the pressure to do so is increased.  Starved of funds to build, maintain, and manage housing stock many local authorities have been forced to pass on these responsibilities to arms-length groups or the private sector, a private sector primarily driven by profit rather than public service.  In the case of Grenfell Tower, the building was maintained and managed by The Kensington and Chelsea Tenant Management Organisation (KCTMO).  Ostensibly such an organisation is devolutionary: it is meant to improve democracy, to make the tenants themselves more directly involved in decision making, priority setting, maintenance and tenancy management.  It is meant to be more responsive than a town-hall based bureaucracy but, in reality, it devolves the management to people who may well be ill-equipped to handle it, leaving only a ‘rump’ of administrative expertise and support to liaise with them at the town hall.  And, of course, it is intended to save money.  This is especially a feature of post-financial crash local government: Austerity has seen local services closed down, or taken on by charitably funded volunteers.  Taking on a local library or swimming pool is one thing, running a large housing project is another thing entirely.  I have no way of knowing if this played a part in Kensington and Chelsea, but certainly local authorities across the country have been stripped of experienced housing officers, building inspectors and other professionals, like Architects and Surveyors, while their work has been sub-contracted.  In the case of Grenfell Tower it seems the building was recently refurbished, part of which was the over-cladding of the structure with insulated panels to improve the thermal performance of the structure.  There are suspicions, as yet unproven, about these panels being the cause of the rapid spread of the fire.  In due course we shall know if this is the case.  Even if they were, it may be that their specification was completely in accordance with the Building Regulations.  It may be that the work was competently carried out, and inspected, in accordance with the specifications though, given the state of the building now, it may be impossible to tell.  If that is so, then the Building Regulations may be changed.  If there were contractual failures, or unauthorised substitutions of materials, then the law will take its course – eventually.  Eventually is not good enough for the victims, their families, or residents in similar buildings the length and breadth of the UK.  The underlying question is whether an organisation like KCTMO is capable of effectively monitoring something like a complex building project, or its on-going management.  The more you break down and extend the chain of management, the more layers you build in, the more risk there is of failure.  What happens to accountability in these circumstances?

The tenants at Grenfell Tower, apparently, made repeated representations to KCTMO, to their elected council representatives and to their MP about safety concerns.  They claim these representations have been ignored.  When the inevitable public enquiry concludes, and reports, we may well find it isn’t only Building Regulations that are revised.

As the shock continues to subside, and recovery begins, people are asking what can be done to support all those directly affected: victims and relatives, emergency services workers, police etc.  I have heard pleas for on-the-ground community mental health workers to be deployed.  I have to ask where they will come from?  Surely not from NHS mental health services so eviscerated like every other public service by Austerity cuts that in normal times you can’t get an appointment for week or even months!  And as for rehousing the survivors in three weeks, as the government has promised; what about funerals?  The heartbreak of those whose traditions and religion require particular arrangements, which cannot be observed, is palpable.

No, everywhere you look in this tragedy you find the taint of Austerity that has been sucking the life blood out of our communities for years.  The aftermath of the fire has also exposed fault lines that run through ethnic, cultural, and class divides, and exposes the very centre of our political system to a charge of institutional disinterest and carelessness.  If not handled with great sensitivity, and determination, the consequences for our society may reach further, and last longer, than the immediate effects of the fire itself.  It would be tragedy heaped upon tragedy if another victim of this event were community cohesion.

This site uses Akismet to reduce spam. Learn how your comment data is processed.